Born and raised in New Orleans, Sean Johnson “ended up going to a liberal arts college in Olympia, Washington,” he says. There, he tried his first yoga class — and didn’t enjoy it. The second time around, something clicked. 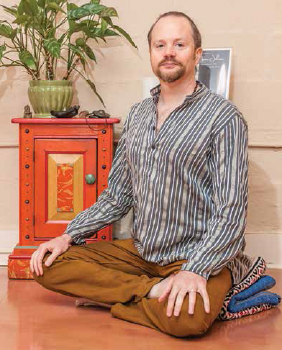 Born and raised in New Orleans, Sean Johnson “ended up going to a liberal arts college in Olympia, Washington,” he says. There, he tried his first yoga class — and didn’t enjoy it. “I signed up for a series and went to my first class, and the teacher ended up yelling at me,” he remembers. “I thought that was yoga. I thought, ‘When you go to yoga, people yell at you.’”

Johnson didn’t plan to try again, until another professor announced that her class included a regular yoga practice. This time around, something clicked.  “She had a completely different approach, and it resonated with me,” he says. “It was more mindful, and a little bit more meditative. Those first yoga experiences introduced me to a completely different way of being in my body and with my breath.”

Nearly 20 years later, Johnson owns and teaches at Wild Lotus Yoga, a beloved studio with two New Orleans locations. “As my practice and my teaching evolved over the years, I started teaching vinyasa yoga and bhakti yoga,” he says, explaining that the goal of bhakti yoga is to “bring a little bit more of a heart connection to the practice through creativity and imagination, and music and storytelling.”

He sees himself as an “ambassador for New Orleans yoga,” traveling to conferences, workshops and festivals worldwide to teach and play kirtan, a type of devotional music, with his group, Sean Johnson and the Wild Lotus Band.

Wild Lotus Yoga offers a range of classes in different styles, with difficulty levels spanning from “mellow” to “spicy” — named this way so they sidestep the natural hierarchy of numerical labels.

The studio also hosts a number of free or donation-based community classes. “It’s been important to us to be able to offer yoga to folks who may not be able to afford it,” Johnson says. “We’ve been a pioneer in that way — with community and sliding-scale classes.” He estimates that before Hurricane Katrina, New Orleans was home to just four or five yoga studios, including Wild Lotus. The community has grown so much since then, that, in Nov. 2011, Yoga Journal named New Orleans one of “10 towns with top-notch yoga.”

"Yoga can be a practice that can help us enhance the joy of life, and really feel and celebrate and savor life more vividly". —Sean Johnson

“One of the things that really keeps me motivated is our community,” Johnson says. “We’re going on 13 years now as a studio, and we’ve built up a really incredible staff of teachers and [a] pool of students who’ve been coming to us for years. Knowing that they’re there, and that they come back again and again — it motivates me.”

Johnson calls himself mostly vegetarian. “I lean pretty hard in the vegan direction, but I’m not militant about it,” he says. “I don’t believe that diet is something we should be judgmental about.” He occasionally indulges in seafood, and notes that he’s fortunate to be married to a holistic health counselor and yoga teacher who loves to cook healthy meals.

Wild Lotus Yoga’s eight-month, interdisciplinary teacher-training program, Soul School, offers Johnson the opportunity to watch yoga students transform into teachers.
“It’s a yoga teacher-training program that really helps people to cultivate a deeper relationship to their own soul and their imagination,” he says. “Along with that comes the fitness: the flexibility and strength.”

“The first thing to share is to let beginners know there’s many different styles, and levels of intensity and personalities,” Johnson says. He encourages new yogis to “try out some different teachers, different schools and different styles to try to find the place where they feel that connection.” wildlotusyoga.com