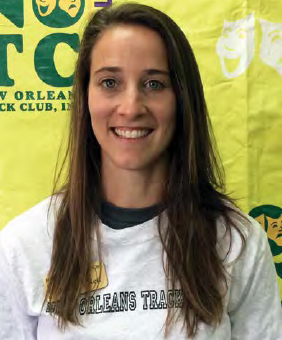 Jennifer Neil started running track and cross country when she was 13 — and although she ran throughout high school, she was ready to stop when she got to Louisiana State University. “When I graduated, I was like, ‘I’m never running again!’” she laughs. “But my coaches encouraged me to run in college.” She studied nutrition at LSU, and she went on to work at Fleet Feet Sports in Baton Rouge (where she discovered she enjoyed coaching others). “I really got interested in training and helping other people,” she says.

After becoming a certified personal trainer, Neil returned to New Orleans to open Louisiana Running Company on Canal Street. Shortly thereafter, she began working with the New Orleans Track Club. As the club’s race director, she supervises and coordinates events and races throughout the greater New Orleans area. “The New Orleans Track Club puts on about 20 to 25 races each year, and I coordinate those races,” she says. The club also works with other running organizations in New Orleans, like the Crescent City Fitness Foundation, to host races of varying distances.

In addition to directing local races, Neil also works with personal training clients as a boot-camp coach at Guerre’s Fit Camp in Harahan.

Helping her clients get fit energizes Neil in return. “It’s funny — whenever I’m training people, I’m trying to get them motivated,” she says. “I’m motivating them, and,
[with] the things that I tell them, I feel like they actually motivate me!”

Running is also a way for Neil to center herself. “I feel like I’m living when I’m running,” she says. “Even if it’s a hard run, you don’t have your phone with you. You can just clear your head. When you’re finished, you feel accomplished. That’s what’s always kept me coming back to running.”

“I love breakfast,” Neil says. “That’s my favorite meal of the day.” Simple, protein-packed breakfast tacos, with eggs, refried beans and hot sauce, have a special place in her heart.

When she’s running around all day, or when it will be a while before her next meal, Neil grabs a Smoothie King smoothie. “When I get smoothies, I either get Angel Food or the Chocolate and Banana Gladiator,” she says. “I try to eat at least two hours before I run and [also have] something right after I finish.”

Neil needs no prompting to remember the inspiring story of one of her boot-camp students. “This one lady who comes to boot camp — she’s never missed a class,” Neil says. “She’s maybe missed one class in five years.”

When she began taking boot-camp classes, the student was severely overweight; she attended sessions religiously for about two years. “One day, she came to class and she had a pair of jeans in her hands,” Neil remembers. “She said, ‘I lost 100 pounds today!’ She brought before and after pictures.” Neil is continually inspired by students who commit to their fitness goals, and she’s glad to help them get where they’re going. “It’s exciting to see people sticking with their goals and training,” she says. “Anybody can do that — you just have to have the drive and the willpower, and keep yourself motivated.”

Those who are interested in beginning a fitness regimen shouldn’t let fear defeat them before they start. “Try not to be too intimidated,” Neil urges. “A lot of people, when they’re just starting out, they get nervous or scared. You have to be positive with yourself, and set goals. Goals are what keep you going.”

She points out that running is the perfect beginners’ sport, because it requires zero equipment and can be done anywhere. Here, too, starting slow is the name of the game. “If you’ve never done anything before, go out and run 30 seconds — then walk for 30 seconds,” she suggests. “Then run again. Do that 10 times, three times a week for the first week.” New runners can gradually increase the intervals of running and walking. “Eventually, you will be running five miles, and it’s going to be hard, but you can do it,” Neil says. She also suggests using a calendar to schedule dates and times for workouts.

The New Orleans Track Club recently partnered with Smoothie King to form the new Smoothie King Race Team, with honorary captain Jrue Holiday of the New Orleans Pelicans. Holiday will appear at multiple upcoming races to meet fans and fellow runners; give away prizes, like free race entries and signed basketballs; and encourage more New Orleanians to get involved with the Race Team. “Our goal is to get involved, and to get people to live healthy and active lifestyles,” says local Smoothie King marketing manager Katherine LeBlanc.