If you’ve driven down Tchoupitoulas Street in the past year and a half, then no doubt you’ve seen — and maybe even been a bit intrigued by — the Supra CrossFit Body Transformation Center. 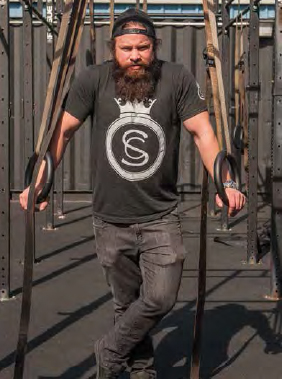 If you’ve driven down Tchoupitoulas Street in the past year and a half, then no doubt you’ve seen — and maybe even been a bit intrigued by — the Supra CrossFit Body Transformation Center. This particular CrossFit gym (also referred to as a “box,” by those in-the-know) is the brainchild of New Orleans native and entrepreneur Jonas Deffes. As the son of divorced parents, Deffes grew up splitting time between Central Florida during the school year and New Orleans during the summer. But no matter where he was, he was always active. “I was more into extreme sports, such as surfing and skateboarding, which were less team-oriented and more about improving yourself as an individual,” Deffes says. “As I got older, I felt a huge connection and passion with helping others improve themselves too through fitness.”

After a brief relocation to Florida after Hurricane Katrina, Deffes moved back to New Orleans and started Nola Boot Camp in 2007.
“When I first moved back to New Orleans, I was just doing one-on-one personal-training sessions, which was great, but was very limiting on the amount of people I could help,” he says. “So I started doing group training, which spawned into creating Nola Boot Camp. [We] now have three locations throughout the city where we help hundreds of women get their fitness jumpstart.”

Then, in January 2014, he decided to open a CrossFit facility that would help even more people in the New Orleans area. “I had a vision to open a state-of-the-art CrossFit facility that is more geared toward the professional and the general public — those who would enjoy doing CrossFit in a nice and clean, and non-intimidating environment,” he says. “At Supra CrossFit, I was able to create a one-of-a-kind facility that has complete outdoor and indoor training areas, making the experience very enjoyable. We also integrated a very sophisticated computer system that tracks everyone’s workouts and performance to ensure they are always making progress.”

For Deffes, who typically works out four times per week — varying between traditional weightlifting, powerlifting and CrossFit methods — it is the community and group aspects of boot camp and CrossFit that makes these types of workouts so enriching. “You get a sense of belonging and purpose behind your workouts,” he says. “It starts to become a place you look forward to coming to and feel happy about everyday. You get motivated and energized by working alongside other people as well. Everyone is friendly, and you can feel that you are a part of something special and that you can be proud of.”

“The best way to stay motivated for me, is to have two types of goals,” Deffes says. “One would be a short-term goal that may be 6 to 12 weeks long, where it might be reaching a certain body weight or lifting X amount of weight. The other would be more of a lifetime goal of being healthy and increasing my quality of life each year so I can enjoy being active with my two daughters as they get older.”

“My diet is nothing fancy by any means,” Deffes says. “I’m a creature of habit, and I may eat the same meals for months. I usually prep and cook my meals for the week on every Sunday. I hate chasing my next meal, and, when you do that, you can easily end up making unhealthy food choices.” And while his favorite foods include chicken, steak and sweet potatoes, he admits that his guilty pleasure is a toss up between cookies and cheesecake.

“I have so many success stories in the past eight years; it’s really hard to pinpoint one,” Deffes says. “What’s interesting is that by helping so many others reach their goals, it has allowed me to be able to do other things like donate and sponsor causes that I personally like. My favorite was when I rented a water park for an entire Navy SEALs team to [enjoy with their families] before they got deployed. Giving back to others and causes is what makes me the most happy.”

“My best advice is that it’s money well spent,” Deffes says. “Trust me, you are going to spend the money on something — whether it will be fast food or a gym membership. But you will spend that money. You might as well put it toward something that is going to increase your health and quality of life rather than on something that will harm it.”