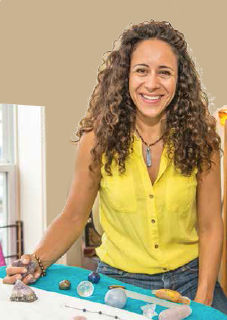 For Met Salih, a Reiki practitioner at Iridescence Healing, it was the local film industry that initially attracted her to New Orleans. The dark-haired beauty is of Turkish Cypriot descent (meaning from the Mediterranean island of Cyprus), but she was raised in Cobham, Surrey, England, in a small village 17 miles southwest of London. Later, she moved to London after graduating from college. “During my childhood, I spent all my summers in Cyprus — so I got to experience the vast differences in British and Turkish cultures,” Salih says. “I was exposed very early on to my family’s ancient ways and to the modern living that England had to offer.”

Nearly 10 years ago, Salih moved to the United States to pursue her dream of becoming an actress. “One day I decided to move to Los Angeles to train at an acting school I had enrolled in online,” she says. “After four years in [Los Angeles], fate introduced me to a friend. She told me she was moving to New Orleans and that the movie industry was going to be huge there. So I packed my bags and off I set to the Big Easy.”

Since that time, Salih has worked on numerous movies and television shows, including Dawn of the Planet of the Apes, Treme, Now You See Me, Olympus Has Fallen and, most recently, NCIS: New Orleans (in which she is doubling the lead actress Shalita Grant). But that’s just one side of Salih.

She credits her exposure to the healing arts to her mother, an artist who has always been interested in natural medicine, energy work and crystals. In her early 20s, Salih decided to get certified as a Reiki practitioner. Six years ago, she decided to open her own studio. Her sessions consist of an array of techniques, including Reiki, head massages, crystal healing, aromatherapy, chakra balancing, and sageing or smudging (a tradition that goes back thousands of years) to wash away emotional and spiritual negativity.

“I love the action and adrenaline you get to experience, while acting and doing stunts,” Salih says. “With energy work, you experience the exact opposite. It is very soothing for the soul to center oneself and be present in all things. It helps me stay focused and humble to know I am doing something positive for the greater good of all things and that I have the opportunity to change someone’s life.” iridescencehealing.com

ON STAYING MOTIVATED
“I am a yoga instructor at Wild Lotus where I teach teenagers. I also really enjoy swimming, running in Audubon Park and practicing yoga. I train with a dear friend — Tanya Simmons — once a week doing Qi Gym (a combination of brain gym and Qi-gong, which retrains the brain and strengthens the body through flowing movements).”

HER FUEL
"You are what you eat, so I am very conscious of what I consume,” Salih says. “I stay away from gluten products and dairy unless it is goat’s milk. I also stay away from soy, corn, GMOs and red meat. It is important not to overeat and to make sure we eat a balanced diet. I eat very healthy and seldom eat fried, processed foods. My favorite foods are Thai, Indian and Mediterranean, and [my guilty pleasure is] French fries!”

SUCCESS STORY
“There have a been a few occasions when I have physically seen an improvement with a client after 24 hours,” Salih says. “One incident was when a lady came to me with excruciating leg pain. Her leg was swollen, and she was walking with a stick. The pain was making it very difficult for her to sleep. After one session with me, she called the next day to let me know the swelling had gone down; the pain had subsided; and she slept for 10 hours straight. Sometimes, we all need a facilitator to remind us that we are enough, and we can conquer our own demons and create our own success stories.”

WISE WORDS
“Everyone can benefit from a session; it is a massage for our energetic body — a meditation whereby one can become relaxed and reawakened to their spiritual, emotional self,” Salih says. “An energy tune up is what I call it! It is important to make time for our own wellbeing, to honor our bodies and mind, to create balance internally. Life is to be lived fully, and we need to look after the one thing that can provide us with infinite happiness — our immaculate vessel.”