Less than 30 days after her diagnosis, Carbo-Perez underwent a double mastectomy and partial breast reconstruction. 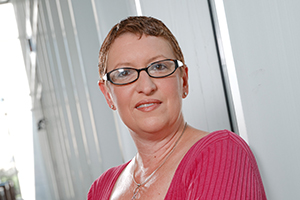 In the fall of 2011, Gina Carbo-Perez was going to Las Vegas. She and her husband, José, had booked the trip, planning to renew their vows. Everything was set.

That is, until she was diagnosed with breast cancer. Carbo-Perez, who had breast implant surgery in 1989, had been advised to get yearly mammograms, but hadn’t. A mammogram and ultrasound revealed four tumors in her breasts. Less than 30 days after her diagnosis, Carbo-Perez underwent a double mastectomy and partial breast reconstruction.

And after learning that Tamoxifen, a drug given to breast cancer patients to prevent feeding cancerous cells with estrogen, was linked to uterine cancer, Carbo-Perez decided to undergo a hysterectomy for her own peace of mind.

Carbo-Perez broke the news of her diagnosis to her family, including son Hayden, 20, on a Friday. “I said, you have the weekend to scream, curse at God, cry, whatever you have to do, but come Monday, it’s over,” remembered Carbo-Perez, who “did the five stages of grief all in one weekend.”

Carbo-Perez was shocked to learn that she had most likely had breast cancer for seven to eight years without knowing it. “Even with all the racing and running and wearing pink, I didn’t know what the symptoms were,” she said. Though Carbo-Perez’s family has a history of breast cancer, they had never discussed it.

Now, Carbo-Perez urges women to talk to their families about breast cancer, and be proactive about seeking early detection.

Facing her potentially life-threatening situation, Carbo-Perez resolved to remain optimistic. “When you have cancer, you look at everything differently. It’s like you get a second chance,” she said. “You learn what’s important and what’s not.”

Carbo-Perez focused on the positives: for example, the tummy tuck that came along with the first phase of reconstruction, and the support she found in a close community of patients, doctors and nurses.

She’s looking forward to the results of her breast reconstruction surgery and growing her hair long again.