Gearing Up for Greatness

At age 64, Mackie Shilstone shows no signs of stopping. 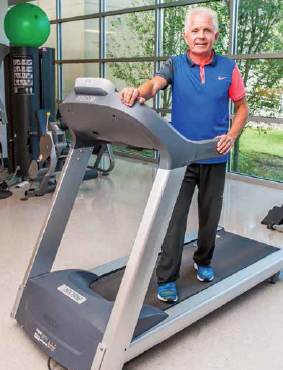 At age 64, Mackie Shilstone shows no signs of stopping. The beloved local fitness consultant — a New Orleans native who attended Tulane University for his undergraduate and graduate degrees — was the first strength and conditioning coach at Tulane. He also raised money and built the first weight room at Tulane, and later became the co-track coach. Over the years, he has written fitness columns for numerous magazines and newspapers — he currently writes an online column called “Optimum Performance,” which appears on NOLA.com and the same column, under the name “Sports Fitness,” appears in the Sunday Times-Picayune — and he’s had a number of radio and television segments as well. For the past 17 years, he has been the fitness and wellness expert on WWLTV’s Morning Show.

As if all of that’s not enough, Shilstone also serves as St. Charles Parish Hospital’s fitness and wellness expert. For the past 13 years, he has even designed and directed health and fitness programs for other major medical facilities in the metro New Orleans region, including spending seven years as the Director of Health and Fitness for the John Ochsner Heart and Vascular Institute. To take it another step farther, Shilstone has also written seven books. One of these, Stop Renting Your Health, is available for free on his Website. “It is a strategic plan to take back ownership of your
health,” Shilstone says. “It is a comprehensive approach to taking control of your health with fitness, nutrition, stress management, medical testing, physiological testing and more. It mirrors my St. Charles Parish Hospital program.”

Shilstone first got involved in professional sports performance and wellness in 1982 by helping former gold medal Olympic boxing champion Michael Spinks. “We made history together, which put me on the map internationally,” Shilstone says. “Three thousand pro athletes later — and more teams than I can count (such as the San Francisco Giants, the St. Louis Blues and the New Orleans Saints) — here I am today helping Serena Williams, Peyton Manning and Andrew Ward (the No. 2 rated boxer in the world).”

ON STAYING MOTIVATED
“I think about my age and how I must outperform my pro clients at what I teach them,” Shilstone says. “I think about how, if I do not live what I preach, then I am a phony.”

HIS FUEL
“I have no favorite — I eat to live and not live to eat,” Shilstone says. “I follow a Mediterranean-style eating plan; I have not had red meat in 35 years, no fried foods, limited dairy and no white flour or sugar. I have egg whites and fruit for breakfast or my own protein shake with fruit and greens in water with oatmeal or shredded wheat. Lunch is a protein salad, or fish or chicken and green vegetables. Dinner is protein — fish, chicken, salmon or turkey — with brown rice, green vegetables, salad with vinaigrette dressing and a glass of wine. Maybe, I’ll have popcorn later that I pop myself with olive oil and no salt.”

WISE WORDS
“Follow your passion and not your pocketbook,” Shilstone says. “It
will lead you to a path of success, fulfillment and prosperity. And, never lose sight of God, and why you are on this planet.” mackieshilstone.com