A local Certified Health Coach shares the gift of wellness. 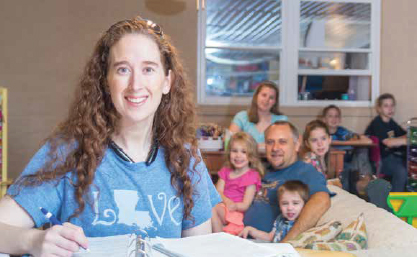 Johanna Braud, a Certified Health Coach with Optimal Health, was born and raised in New Orleans. Her family moved from Gentility to the Slidell area when she was 5 years old, and she has enjoyed living on the Northshore ever since. However, at one point, she was severely overweight and was finding it difficult to manage daily tasks, such as doing laundry and washing dishes — plus caring for a newborn. That was when she decided to make a change for lasting health.

“It’s kind of miraculous how I actually arrived where I am today, assisting others to a healthy lifestyle with Optimal Health,” Braud says. “Just a little over three short years ago, I was blessed to have my seventh child. And although I had been diagnosed with placenta accreta around the 32 weeks gestation, and delivered early at 36 weeks gestation, I had the great fortune of not having to have a hysterectomy as originally planned. The accreta had simply disappeared! This whole scenario forced me to realize two amazing things: First, I had been given a tremendous gift to retain the gift of fertility, and, secondly, I was in serious need of some real lasting health.”

At that time, she was 85 pounds overweight and caring for a newborn — plus her other children, ages 1, 5, 6, 7, 9 and 10. She was always tired and achy, and, at times, struggling with bouts of depression. Her last pregnancy and birth experience forced her to re-evaluate what was important to her and what she wanted out of life. “I wanted to be a fun mom,” she says. “I wanted to be an energetic and spontaneous wife again. I didn’t just want to lose weight. I wanted to live a full and vital life with this amazing family I had been blessed with.”

That’s when she found out about Optimal Health — a health program that focuses on personal coaching — and that a dear friend could be her personal health coach. “I began my journey on Jan. 6, 2014, and, by my birthday in April, I was down 35 pounds,” Braud says. “I felt like a whole new person and had more energy and joy than I’d had in years. I was referring friends and family to my coach all the time. In her loving, patient way, she kept telling me that I should consider coaching myself — as I was the one living it, and I was the one inspiring others.”

After several weeks, Braud realized that she wanted to invite others to join her in the program. “These were people I truly cared about, and I knew this was a gift I just had to share,” Braud says. “The rest is history. I’m a Certified Health Coach assisting 20 to 30 people on a monthly basis, and I have a team of six coaches under me. This has become a source of fulfillment and joy, and I’m so glad I took the plunge.”

Today, Braud finds happiness in creating connections with new people. Most importantly, she enjoys seeing clients make breakthroughs in their unhealthy mindsets and make the decision to choose health for themselves — not because they have to, but because they want to. “I love watching radical physical transformations unfold,” she says. “Breaking people free from the yo-yo diet cycle and the deprivation mindset that many believe healthy has to be, has become one of my biggest ‘whys’ for what I do every day."

“Without a doubt, it’s the community of clients, coaches, mentors and, of course, my kids and husband who live day in and day out with me,” Braud says. “It’s their constant example, support and encouragement that helps me choose to be the best version of myself every day.”

“I remember to drink water every morning to kickstart my metabolism and eat within 45 minutes of waking; then I eat a small portion-controlled, balanced meal every two to three hours,” Braud says. “I eat six small meals per day. For three or four of those meals, I crave lean proteins cooked up with low-carb veggies. This may be quick turkey bacon crustless quiches I pre-cooked over the weekend for a quick breakfast; a spicy cajun chicken and peppers lettuce wrap; or, my favorite, pre-seasoned blackened salmon from Sam’s Club with some tasty broccoli for dinner. For snacks, I may choose a piece of fruit and some Greek yogurt,or some almonds and low-fat mozzarella cheese. My guilty pleasures aren’t that guilty when I can grab a chocolate-covered, caramel-filled peanut butter crunch bar that’s low in calories, carbs and fat.”

“My Aunt Jayne, at 62 years old, had lived her entire adult life struggling with weight, and, many times, living with morbid obesity,” Braud says. “In a last ditch effort, she had Lap Band Surgery done around four to five years ago, and, while it produced initially a 75-pound weight loss over the course of 18 months, she still had another 75 pounds to lose — plus she had not been prepared for the lasting longterm ill effects it would place on her life. As hopelessness set in, she steadily started to gain the weight back. Thankfully that’s where Facebook, our program and I came into her story. She started the program in Jan. 2015, and, by Sept. 2015, she had lost 85 pounds for a total health transformation of 121 pounds. Coaching not only made her healthy, but it gave us both a deep and abiding relationship that might never had formed otherwise.

“If you’re seeking better for yourself, ask yourself, ‘why?’” Braud says. “And though it may take some time and may even be an uncomfortable place to be, take a look at where you are in your health, and then imagine, ‘what if?’ If we can envision the life we want to create, it can drive our current actions. If you need help to do this, get it. In fact, it’s imperative! No one can live in the Southeast Louisiana culture, and survive the cuisine and the laissez les bons temps rouler atmosphere without some support. Find yourself a community ASAP. It is possible to have that life you dream of! I did it — imperfectly, maybe — but I did it, and you can too!”