Ivan Blazquez went vegan last summer, and he emphasizes that building a strong body has less to do with eating protein than most aspiring weightlifters think. 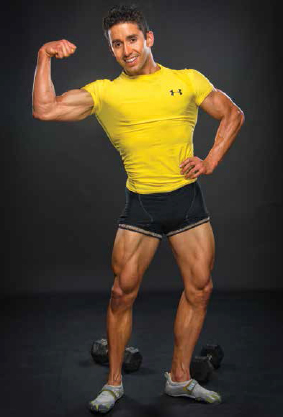 After going vegan last summer, Blazquez has no plans to return to eating animal products. “I eat all plant-based foods,” he says. “It’s been a year — and it’s been the best decision I’ve made in my life.” Fresh fruits and vegetables, naturally, play a large part in his diet, along with beans, nuts and seeds. “Within those simple groups, there’s a variety of choices,” he says. “I never eat the same thing.” As a natural, drug-free bodybuilder, he also hopes to debunk the “steroid stigma” often associated with professional bodybuilding.

“Success keeps me motivated — the ability to succeed,” Blazquez says. The advantages he reaps through exercise and healthy eating help inspire him, too. “The health benefits; the way it makes me feel; the way I function … It’s a lifestyle, and it’s a beautiful thing,” he says.

Blazquez also ties his own success in with that of his clients. “If my clients are not reaching their goals, I’m failing,” he says.

“It’s simple,” Blazquez says. “Just start moving.” Knowing that accountability is often the key to maintaining an exercise schedule or a healthy diet, he suggests hiring a trainer if that’s the only stumbling block keeping you from getting fit. Personally, Blazquez hates sitting still; you’re likely to find him pounding out a set of pushups during a Saints-game commercial break. He cites scientific research showing health benefits for office workers who walk for just two minutes per hour. “As soon as you start moving, everything gets better,” he says.