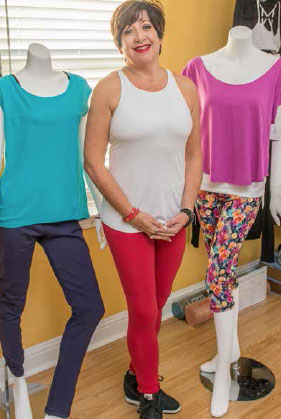 Kimberly D. Munoz, owner of locally based Core Creations — a line of active lifestyle clothing — was born in Baton Rouge and raised in New Orleans. With the start of her clothing line this past April, she says that her “life truly came full circle.”

In the late ’80s, she entered Louisiana State University as a fashion merchandising major with plans to launch a career through New York’s Fashion Institute of Technology. However, she took a different path and established a successful career as a clinical intensive care nurse. As an active person, Munoz says that, when she discovered Pilates, she became instantly hooked. She went on to found Nola Pilates, New Orleans’ first group Pilates studio in 2007, followed by the nation’s first Xtend Barre studio in 2008.

“I was opening amid the chaos of the Hurricane Katrina recovery and was moved by the emotional release these workouts were providing our clients, but also by our clients' core physical and psychological strength and commitment to positive change,” Munoz says. “We were strengthening the minds, bodies and souls of New Orleanians as the city was being rebuilt. Inspired by an interest in further blurring the lines between an active lifestyle and women’s everyday realities, I was able to make my way back to fashion with the development of Core Creations.”

The active lifestyle clothing collection is designed to be at the core of one’s studio-to-street wardrobe. “We combine simple, modern shapes with high-performance organic fabrics,” Munoz says.

Munoz’s personal fitness and diet routine is based on moderation and discipline. “I am careful to make sure and get my workout in around my very hectic schedule but, more importantly, I make careful food and drink choices each and every meal,” she says. “I use Pilates as my main form of exercise … I add in Xtend for increased flexibility and yoga for my mind.”

“Staying motivated is the biggest challenge we all have … I believe visualization is key,” Munoz says. “You must visualize yourself achieving that goal in order to attain it. Find an activity that you like. Reward yourself. Be accountable. Keep a food journal — it always helps me to get back on track.”

“I try to eat as much whole food as I can,” Munoz says. “I typically shop the perimeter of the grocery and stay clear of all processed foods. My fuel is water with lemon. My guilty pleasure is dessert. Yes, I said that out loud.”

“Early in my studio’s opening, we were in our first building that was in the heart of the devastation in Lakeview,” Munoz says. “As women would come in and experience Pilates, they would leave very emotional. Our clients would say, ‘For the first time since the storm, I could not think about the gutted house or the plumber who hasn’t shown up because I had to concentrate in order to make my body move the way I needed it to move.’ I knew [then] … that we had created something bigger than just a Pilates studio.”

“For those who are considering starting a fitness program, it has to be about feeling great inside,” Munoz says. “It has to be about creating a life that you love. But above all, you have to get dressed to do all these things, and, when you can find an outfit that allows you to remain fashionable as you work out, run errands and go to lunch, then you have arrived!”

Core Creations is available at Nola Pilates and Xtend Barre at 140 W. Harrison Ave., and at corecreationsapparel.com.