At 14, Jenna Cavalero was diagnosed with bone cancer in her femur. She began her grueling treatment immediately. 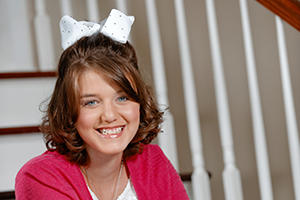 At 14, Jenna Cavalero was diagnosed with bone cancer in her femur. She began her grueling treatment immediately — 10 rounds of chemotherapy, followed by major surgery to replace the cancerous part of her bone with a titanium rod, followed by 19 more rounds of chemo.

Although Jenna still has to avoid high-impact physical activity, she knows her own abilities and limitations. “Don’t tell me I can’t do something,” she said. “I know if I can or can’t do it.”

Beth Cavalero, Jenna’s mom, stayed home from work throughout Jenna’s treatment. While receiving each round of chemo, Jenna had to spent up to 18 straight days in the hospital; her older brother, James, would cheer her up by putting on hats from Jenna’s growing collection. The family made the most of holidays and special days in the hospital, decorating Jenna’s room with signs and streamers.

Jenna was on crutches for almost a year following the end of her treatment. However, just when the teenager was getting back to her life, her prosthesis snapped. The Cavaleros learned that instead of growing around the bone and strengthening it, her prosthesis had  been crumbling her femur. She had to undergo another surgery to have a new prosthesis inserted; thankfully, the second time around, Jenna’s recovery was shorter and less complicated.

Before being diagnosed with osteosarcoma, Jenna disliked hospitals, and once cured, thought she’d be glad never to return to Children’s Hospital. But after making friends with her nurses and other pediatric cancer patients, she visits as much as possible. “I don’t want to forget all of this, because this is what made me who I am,” Jenna said.

At Jenna’s request, the Cavaleros documented her journey in pictures, from her October 2011 diagnosis until she came home the following July. They have almost a thousand pictures, carefully organized in plastic Ziplocs. Jenna is smiling in every one.